As a writer I am ever on the look out for lessons to be learned, allowing me to improve my craft.
Given my limited empathy, I oft find myself second-guessing my ability to reach out to our audience here at Tales of Pylea.

It was another humid afternoon here in the tropics when Humbug brought to my attention a playthrough video for Dreamfall Chapters; specifically book 4.

It is here in Interlude III – The Girl Who Walks Between Worlds that we are introduced to Saga, a new addition to the cast of protagonists.

Saga is a fourteen year old girl; a headstrong, adventurous young soul who lives with her father Magnus in a pocket dimension that sits at the crossroads between the material world and the world of dreams, taking the form of a small house whose windows are attuned to depict different places at different points of time. 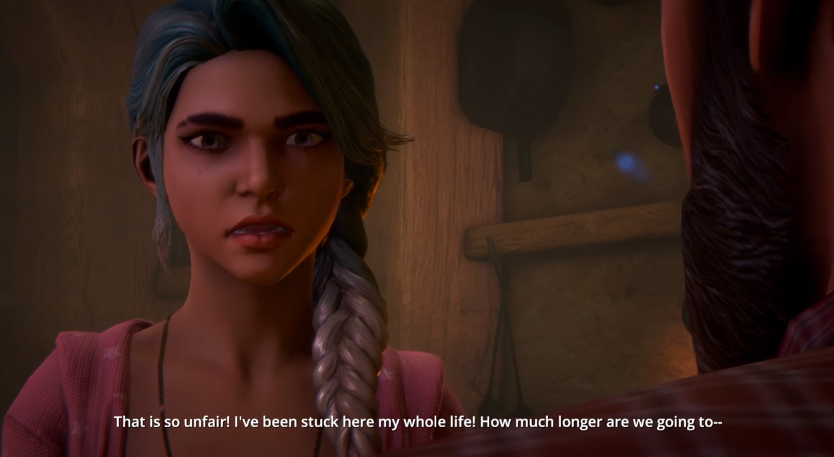 The segment opens on an argument between Saga and Magnus; it is revealed that daddy dearest has erected several wards in place that prevent his daughter from leaving the premises and potentially getting lost in time and space.

Saga has, understandably, grown stir-crazy at being cooped up in her little house all the time but her father has insisted that the wards are in place for the sake of her safety, stating that he will only remove them when he deems Saga is old enough to try navigating the dream world, an apparently treacherous realm that is typically entered through the human subconscious.

Magnus’ fear is then validated as not only has Saga gotten lost in the dream realm before, but her mother has yet to return from her last venture and Magnus, terrified of losing his daughter, refuses to go with Saga as he pines for his beloved wife and continues to hope for her return.

Magnus: “The answer is no. you should know better than to ask, Saga. I won’t risk you getting lost out there again.”

Saga: “I’ll be careful this time! I promise!”

Magnus: “It doesnt matter. I’m not removing the wards.”

Saga: “I’m fourteen, pappa. I can take care of myself.”

Magnus: “That didn’t help your mother.”

Saga: “It’s always about her, isn’t it? I’m not my mother. Whatever happened to her won’t happen to me.”

“She said the same thing. She wasn’t going to get lost. She was coming right back. I shouldn’t worry. I should just…”

“I’ll remove the wards when you’re older. Until then, you’re not leaving the house on your own.” 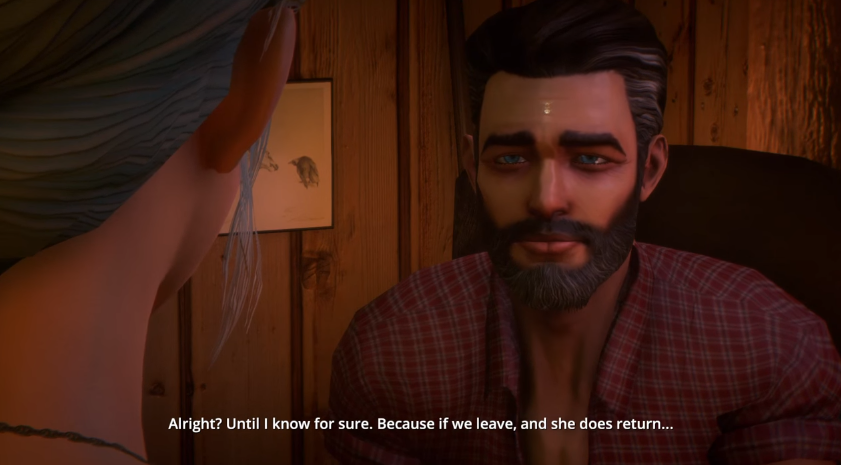 Upon the conclusion of their argument, Magnus, now exhausted goes to take a nap and the player is given control to advance the story by assuming the role of Saga as she seeks to untangle the wards and attain her freedom.

As gameplay progresses, Saga finds the wards, erected through magic powered by her father’s own emotions and memories of his wife.
Sifting through these memories, the player is taken on a journey through a series of touching moments, from the young couple’s arrival in their then-new home, the raising of their daughter who displays an unusual power through their apparently magical lineage, up until the point where Saga’s mother goes missing for reasons unknown.

What both Humbug and I fail to understand is that despite experiencing her father’s memories and heartbreak over losing his wife,
Saga persists in unraveling his wards to travel into the vast dreamscape.

Now, were this done with the intent to find her mother; to breathe life back into her grief-stricken father and restore her sundered family to its former state of happiness, such reckless behavior would be understandable.

However, the player is made very much aware that Saga’s primary motivation is that of restless wanderlust and boredom; fully aware of Magnus’ fears and sorrow, she sets off in complete disregard for his feelings.

As expected, the chapter ends with Magnus returning from his nap only to discover that Saga, his daughter and the only family he has left, is gone. The credits then roll as the player is left with a sense of loss that Magnus is experiencing.

The dialogue is well-written and tells a touching, tragic story of love and loss, but the player is compelled by the game to perform Saga’s actions. A protagonist is a character to whom the player relates and/or roots for but given Saga’s behavior thus far, I find myself unable to fathom why the player would feel a need to continue with Saga on her journey of discovery.

What do you think is the reasoning and justification behind this? We’d love to hear your thoughts, so drop us a comment HERE on Facebook.

Posted in News | Comments Off on Dreamfall Chapters – Musings and Inquiries

When Humbug and I began Tales of Pylea in its third incarnation, amongst my tasks was fleshing out their personalities and early on, we tackled Arianhod’s design. I’ll admit, when I first saw Ari’s visual redesign my jaw dropped.

I believe my exact words were “Holy shit, she’s huge!” 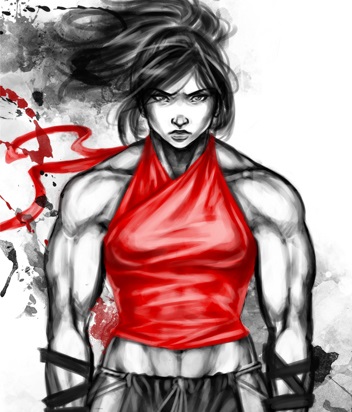 As a male geek who grew up amidst classic superhero and fantasy comics, I’ve always been an advocate for the policies of “sex sells” and “If it ain’t broke, don’t fix it”. So, completely baffled by this new direction, I inquired as to why ToP’s leading lady was now, to quote myself, “built like a rhinoceros that’s come up positive for steroid abuse”. 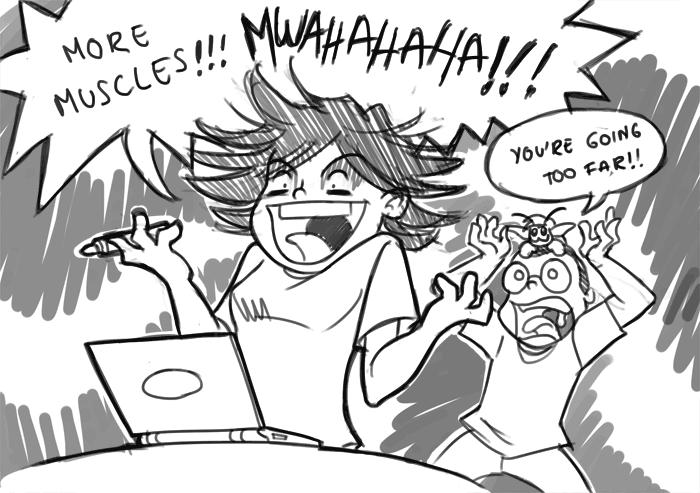 Humbug replied that she felt sexuality was frequently the be-all and end-all in a female character’s design, oft leaving said characters little more than cardboard cut-outs whose primary function was that of eye-candy and little else. 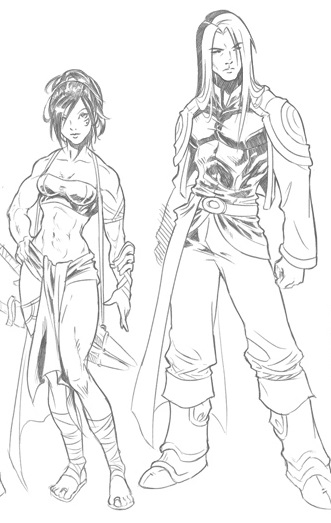 As a girl-geek, she had never found a role model for herself amidst the plethora of superheroines in mainstream comics and with Arianhod, she wanted a heroically-built female lead and wanted to succeed where she felt others had failed.

When I began to write Arianhod, I looked to her fellow protagonist, F’Nor for reference.
When creating a dynamic between two leads, it is important that there be a striking contrast between them, as there would be little point having two characters fulfilling the same role. 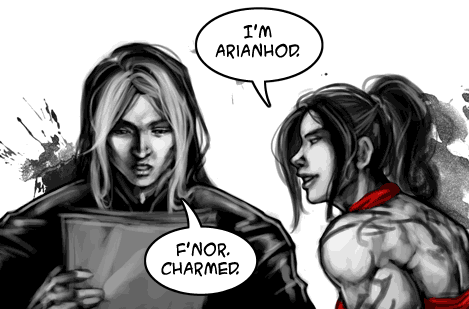 While F’Nor is the head of this dynamic, Arianhod would be its heart. As a demigod who has lived decades in solitude, F’Nor displays the manner of a person who has grown accustomed to living in detached isolation. In contrast, Arianhod’s transformation is far more recent and as a result she is still fairly tethered to her empathy.

Throughout the first book alone, Arianhod displays her humanity with all its merits and flaws, from her conversation with her colleague Lair, where she feels there is more to life than her occupation as a debt collector to the alleyway scene where she spares a debtor’s life as she becomes aware of his plight. 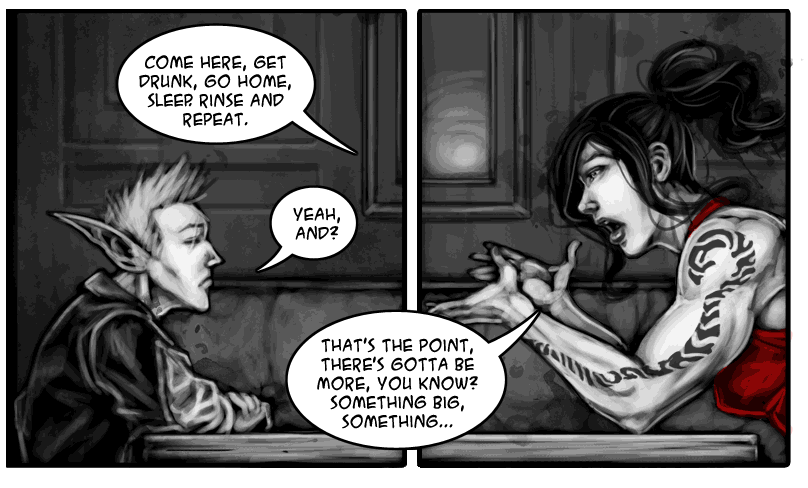 Above: See that? That’s Disney Princess material right there.

Which brings us to her occupation; normally in the process of creating a character, I begin with the intangible aspects, namely their personality and narrative role; only after this is established do I try to establish their physical appearance.

With Arianhod this was reversed and as Humbug made it clear amidst my work’s parameters, Arianhod’s character would conform to her appearance. I then looked over her muscled, tattooed frame and I said “Hey, what if she was a thug? A legbreaker…” as an affiliation with the city’s criminal element and an occupation based upon violence would certainly explain her powerful physique and intimidating tattoos.

Despite being the more human of the two, this did not mean Arianhod had to be the more moral. After all, people are flawed in nature and I wanted her personality to reflect this. I have always believed that while a character’s traits define them, it is their flaws that make them human. 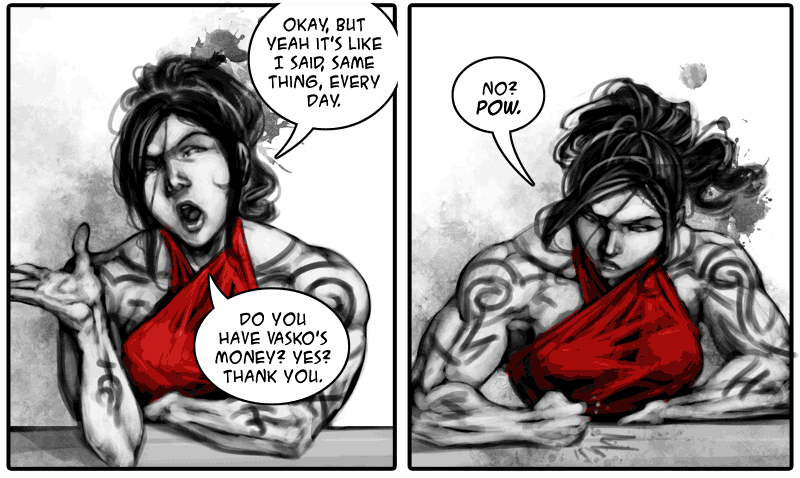 Since F’Nor was clearly a man of reasoning and intellect, I made Arianhod the muscle. A thug who has, due to her life and career choices, chosen to lead a life of violence and this would define how her mind works; that most problems could be solved via force or intimidation. It also helps that she’s a little silly.

To me, the most noticeable trait in which our hero and heroine greatly differ from one another is the matter of sexuality.

In the past I’ve seen others have trouble identifying muscled female characters in a sexual light, as though having greater muscle mass makes a woman asexual. At best they wind up being the ball-breaking man-hater (I don’t need men; I’m independent! GRRR!); at worst they’re the Guy-With-Boobs; the masculine strongwoman one puts into a game or comic to please movements of faux-feminists who seem to hate the very notion of a woman being attractive.

However, Arianhod is attractive, and she knows it. She’s fit, has a pretty face and would be, in the eyes of most men, refreshingly straightforward. A character can be strong and sexy without being solely defined by either. 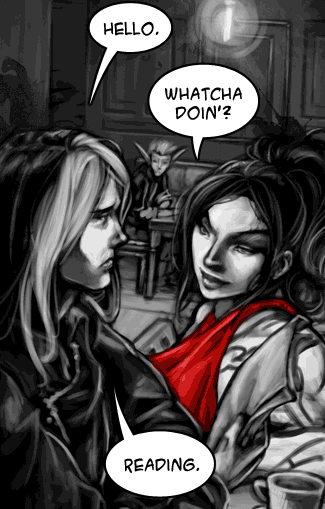 As we see in the bar scene, Arianhod is a strong, capable woman who has no trouble getting tail on a Friday night… 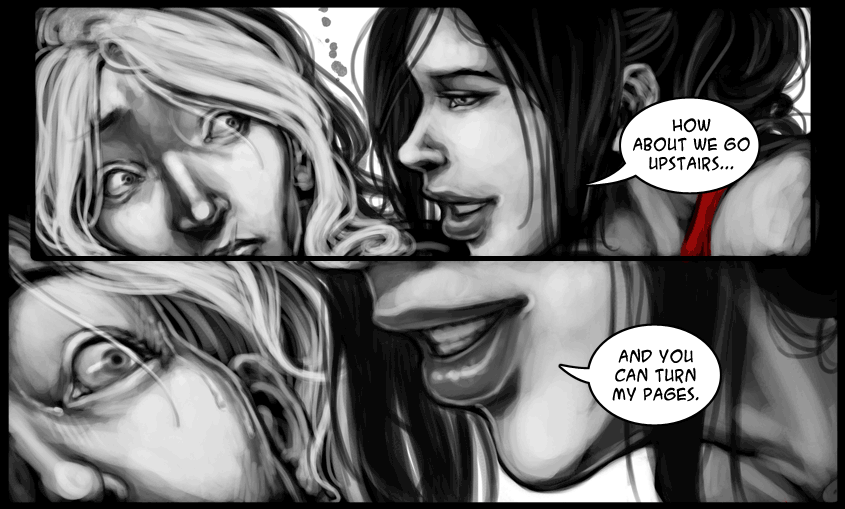 It’s been a blast working with Humbug to bring characters like Ari to life, finding that sweet spot between our very different (and often opposing) views on characters and their design.

Stay tuned for more adventures with Arianhod in Tales of Pylea, updating every Monday!

Posted in News | Comments Off on ToP Narrative: Arianhod

I’m pleased to announce that Par’Dis: Only Human is now available for digital download from our Webstore!

The comic can be found HERE and updates every Friday. For those of you who simply can’t wait, we have the whole book available for sale, including bonus concept art and a gorgeous color cover by Humbug!

Posted in News | Comments Off on NOW AVAILABLE!

A new year… And a new comic!

With Christmas looming around the corner, we have a new treat in store for you all, as another tale unfolds in the world of Pylea. Across the ocean lies Par’Dis; a festive and prosperous city-kingdom amidst the sandy dunes of the Shah’Qel Desert.

Written up by yours truly and drawn by the talented hand of local artist Marcus Heow, Par’Dis: Only Human tells the tale of Constable Sakhmet, a guardian of the city and his daily struggles with human nature, corrupt nobility and mass-murdering lunatics with a flair for the dramatic. 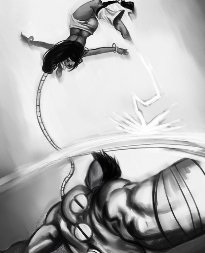 While Sakhmet’s tale is, for now, a one-shot comic we hope to show you more in the future. 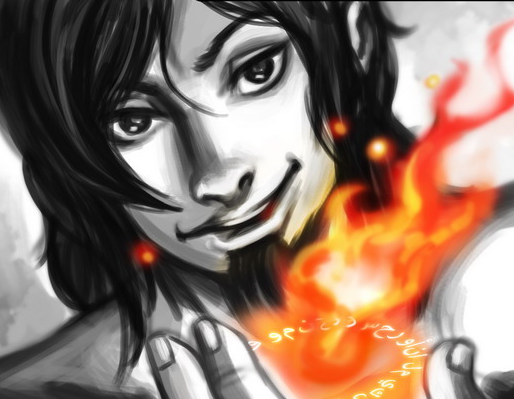 Par’Dis: Only Human will be hosted on the site and the digital comic (including pages of bonus concept art and a gorgeous color cover by Humbug!) will hopefully be up for sale in January. 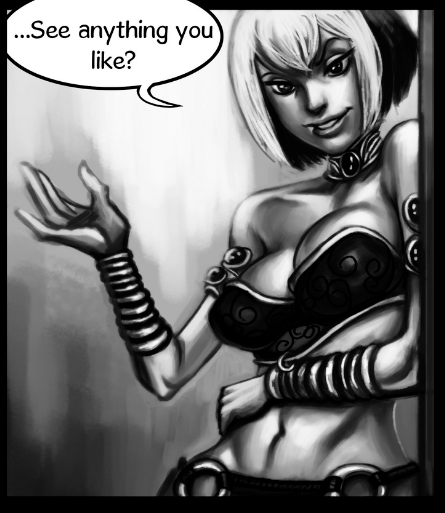 Posted in News | Comments Off on A new year… And a new comic!

The end of the year draws to a close and with it, celebration!

It’s been quite busy since Tales of Pylea’s reboot in the start of 2013, the characters our old fans had come to know and love reinvented for a brand new series.

Initially I was worried that my writing would fail to match up to Matt’s skills and experience, but the surprising amount of positive feedback has assured me that I haven’t mangled Humbug’s baby.

We’ve got a lot planned for the series and we hope you’ll enjoy this journey through the world of Pylea with us.