A Note from the Naga’s Desk #3

Within the world of Mousehunt, the Harbour holds a special place in many a Mousehunter’s ire. Until this point in the game, hunting was a relatively safe haven. You could hunt all day long in the Meadow, and the worst thing that could happen was that you would miss, or nothing at all would come to your trap.

Same thing holds true for hunting within the Town of Gnawnia and the Windmill. All those locations are safe to hunt in. You do not have to worry about losing anything while hunting at those locations.
It isn’t until you unlock and travel to the Harbour for the first time that things become… interesting. From this point on, at MOST locations within Mousehunt, mice have the ability to steal Points, Gold or extra pieces of cheese from you whenever you miss them. This is affectionately known as being Red Boxed, because, well… this is what it looks like on your journal.

And that’s what this page is showing. Ian is being Red Boxed by a Burglar mouse. Though this won’t necessarily be a very common occurrence within the comic itself, trust me… it happens A LOT in the game.

*twitch* A LOT. 😀 But that’s just part of the fun. 😀 Wouldn’t be fun if they just handed you a win with every hunt, right?

Wow, it’s been awhile since I’ve said anything, hasn’t it?

Anyhow, so it was awhile back when I was having a quiet day chilling with Humbug and me mate Marvin when we came upon a topic; public transport in Arteria.

Given the high level of technology integrated with magic (as you may recall from our little post about rune-powered firearms), we figured the bus-equivalent likely took the form of streetcar-trams powered by rune-inscribed rails as well as the odd horse-drawn carriage.

However, with progress comes innovation and based on pictures of old rickshaws in Hong Kong we thought, hey, what about automated golem-taxis?

So, with the brainstorming discussion at the forefront of our thoughts, Humbug asked me to try my hand at depicting our newest creation, the Rickshaw Golem. 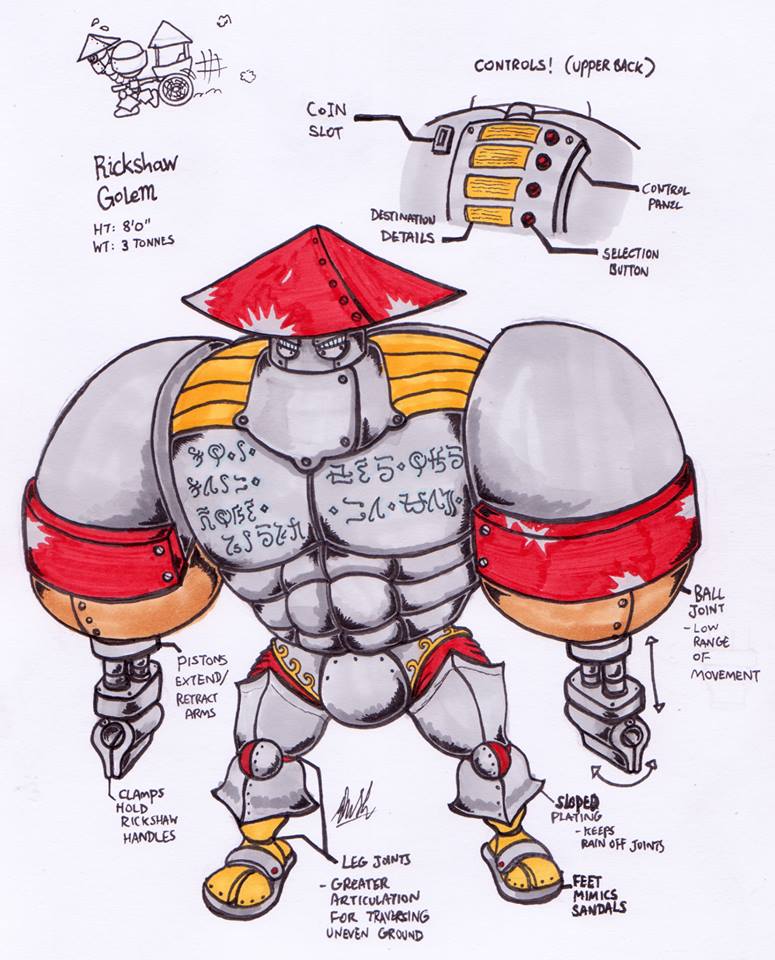 Anyhow, so here was what information I had to work with.

* Taxi-equivalent; the rickshaw golem is designed to haul a rickshaw that can hold up to 3 passengers

* Ricepicker hat
His design was likely a joined effort between the Lorridane and Qiang families.

* Rune-powered
Likely a complex incantation that creates a sort of behavioural code for the golem.

* Superior articulation and range of movement in the lower limbs
To compensate for rough and uneven ground, because nothing could be more disastrous than a tonne of steel tripping and rolling downhill!

So with that, I got to work and after a few redraws, was pretty happy with the final result.

Being as rudimentary an A.I as can be allowed, the Rickshaw Golem is pretty much a form of automated transport. Mounted on its back is a control panel with several pre-designated destinations that is rendered inoperable until money is put into the coin slot.

Once money has been put in, the passenger can press the destination button and the golem can go along on its merry way to the chosen golem-stop.

Also built into the golem is a pre-programmed maintenance command, where at 2AM, every golem will immediately head to a maintenance station where routine maintenance and repair work is performed, after which each golem will return to the last golem-stop it had been to.

This strip contains spoilers for Legend of Korra season 2, so if you haven’t watched it yet, yadda yadda yadda, you know the drill.

Anyways, this exchange happened when Chris and I was talking about the series.

If I drew comics like this I could update several times a day, but I don’t really care for doing gag strips on a regular basis. I enjoy drawing pages where it takes me a minimum of 12 hours to finish a whole lot more. 😛 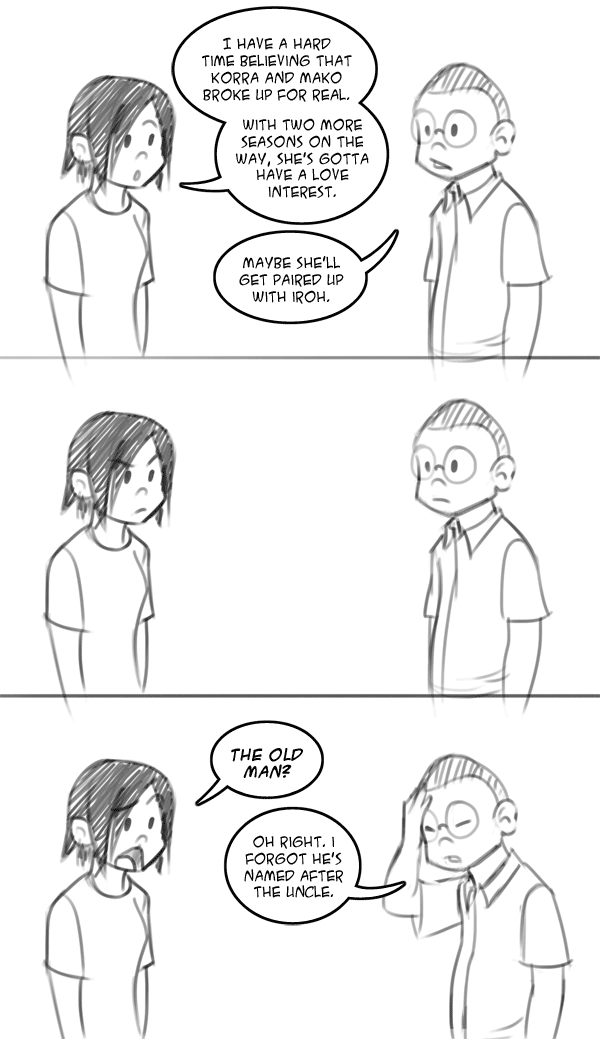 Time for a Snickers

Eh, might as well stick this in the blog. Go read ToP if you don’t know it exists. Seriously, it’s right here, or in the sidebar, whatever floats your boat. 😛 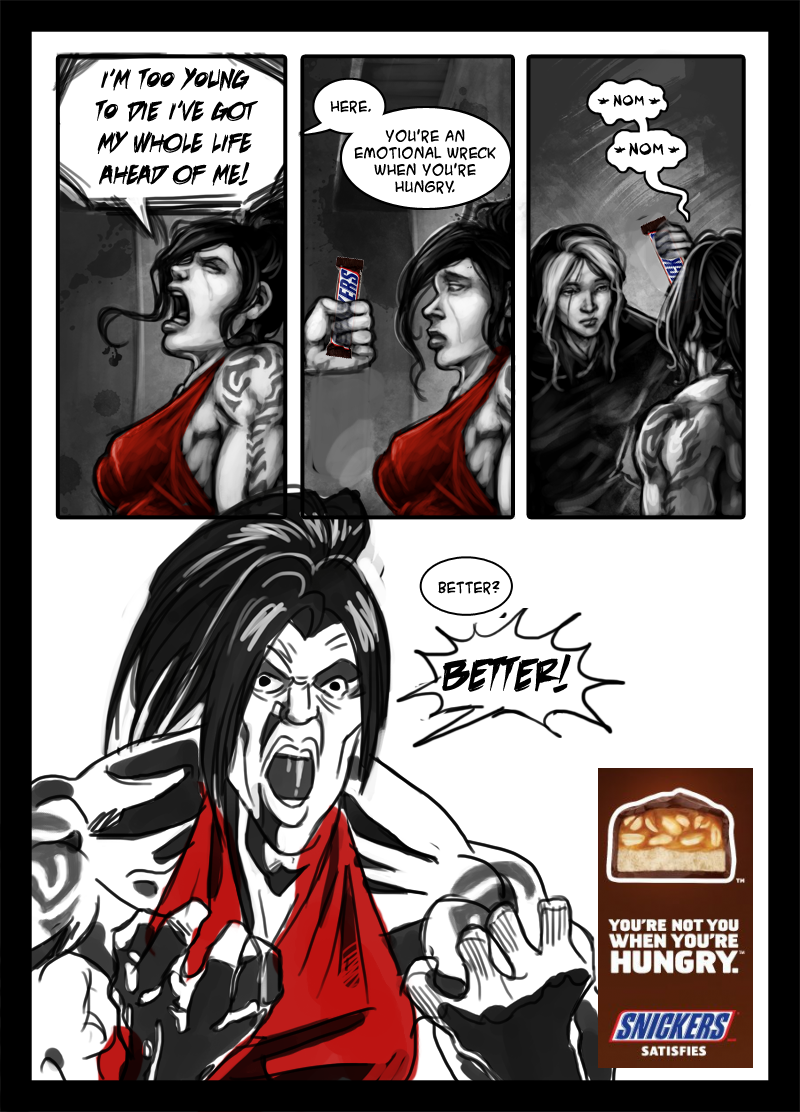 From the journal of Ram Niv, Planeswalker #7

I now write this with haste on the deck of the “Green Wave”. It appears that the tales of river pirates are true. We’ve been followed by a number of their small boats since this morning and even now they are ready to make a sortie. Captain Katta and her first mate believe they will begin their assault come nightfall. I haven’t swung a blade in weeks.

Fleeter says we should get ready. Gruber has already slipped into his mail hauberk and is looking to his weapons. In the event something happens to us and we are overcome, my hopes are for someone to find this journal. Luck be with us.