From the journal of Ram Niv, Planeswalker #5

I think I shall abstain from the taproom of the Smoking Slug for a bit now. The ale is excellent but their propensity of putting live baby slugs in their ale has yet to sit in well with me. Even Gruber has been laid out flat on his back but then again he’s drunk so much, the slugs are still snuggling in his beard. We’re all resting amiably in our rooms above the inn now. For those of you who are headed out for your tankards of ale I’ve only this to say. Beware of men who put their fingers in their tankards.

Posted in Six Packs and Seafood | Tagged RamNiv | Comments Off on From the journal of Ram Niv, Planeswalker #5

A Note from the Naga’s Desk #2

Some of you might be wondering if the friendly chap that Ian has met is based off of anyone I know. He is not. However, he *IS* based off of real events that happened in Mousehunt’s history. If you’ll allow me a moment, I’ll explain.

Something might be available at a later time that’s comparable, of course, but that’s a crap shoot. It might be… or it might never be. You literally never know. Which is part of the draw of these items… you HAVE to get them, just in case, because something this good (in most cases) might never be available again. And of course, the items are NEVER cheap.

At the time that this particular story arc was initially written, there was a small but VERY vocal contingent within the community of Mousehunt (thankfully, not a large majority of the players felt this way, or its doubtful I would have continued playing) that were of the opinion that, if you didn’t have this particular Limited Edition base, then you simply weren’t a real Mousehunter and weren’t worth even speaking to. You were NEVER going to be able to catch mice like *THEY* were going to catch mice, and that was simply that.

Keeping in mind, of course, that this is only a game. In the world Ian’s living in, there’s a bit more logical reasoning behind some of the man’s cockiness… but having this kind of attitude in a game that literally is a free web game astounded me.

And so, our friend here was born. 🙂

From the journal of Ram Niv, Planeswalker #4

Together with Fleeter and Gruber, I spent the last two nights mingling and drinking with the patrons of the Smoking Slug and a good part of the day nursing hangovers and writing what I could recall from the ale induced lively discussions about the city. Arteria is a city-state with a metropolitan population of 36,000 persons. This figure can rise to as high as 45,000 persons during the height of the summer trade season. It has a thriving mixed population of humans, elves and rokhs. It is unknown at present if there is a minority population of other races living here. I shall endeavour to learn more in the coming days.

I’ve determined that the ruling government is one based on Oligarchy, where it is generally acknowledged to exist in the form of a council comprising the senior members of the five powerful and influential houses of Arteria. Some 350 bureaucratic civil servants stand at the ready to carry out the will of the council and to help manage City Hall and various other civil bodies in the management of the sprawling metropolis.

Of the five houses, the Harts are a rokhian family concerned primarily with manufacturing and the development of Arteria. They are followed closely by the Clearbrooks, an elven family concerned primarily with agriculture and the cultivation of sustainable crops to support the city. It is also interested in maintaining a balance from rokhian activities and tends to the many parks dotting the city.

House Lorridane is a human family who are responsible for many of the innovations found in the city. They are concerned primarily with technological advancement, education, wizardry, smithing and archaeology.

The Mongers is a family of what can only delicately be described as hybrids and half-bloods. They have a knack for business and are directly tied to the trading and shipping business of Arteria. In contrast, the last and final House Qiang is a warlike race of humans known as the Hwarans who originate from a faraway land. They are responsible for the city guardsmen, the military training of all able-bodied citizens (militia service is compulsory) and the protection of the city and its citizens at large.

Since we’ve touched on the military might of the city, it is known that Arteria has a standing army of some 1,500 guardsmen to keep the peace. In addition to this formidable force, the city can call upon an additional 1,800 militiamen on short notice to aid in the defense of the city or in some other desperate civil endeavour.

The main person in charge of the army is General Ran Dem. It is important to note that the City Guardsmen and the Bannermen loyal to the various 5 houses are distinctly separate martial bodies. It is only in times of great crisis that the various martial factions in Arteria unite under the leadership of the extremely capable Hwaran
generals of House Qiang.

There are no moneychangers in Arteria. There is however a central financial establishment in the city which serves the various social classes alike. Known locally as The Vault, it is the equivalent of a banking institution
which helps to regulate the widely used monetary system in Pylea. It is noted that Arteria has a mixed economy to sustain its current actuality and future growth, one based on heavy agriculture, fishing, forestry, herding (animal husbandry), industry, mining, and trade.

Based on casual observation, one may easily distinguish four distinct social classes among the citizens of the city. The first being the Upper Class, which comprises of nobles of the 5 houses, the wealthiest of merchants and notable leaders of civic body. The next group is the Middle Class. Merchants, master artisans, educated professionals, and most significant guild members make up this group.

The Common or Lower Class people are the ones most likely to be encountered in day-to-day life. They are the tradesfolk, journeymen, laborers, subsistence farmers, impoverished freeholders, personal servants, and virtually everyone else who do not fall into the former and latter classes. Members of the lower class tend to be poorer and less educated than middle-class people.

While I note with interest the lack of any form of slavery in Arteria, there is however a fourth social class of citizens. They are the golems. At the time of this writing, I have no information regarding the status of golems in this city but it is widely known that they are sentient.

Posted in Six Packs and Seafood | Tagged RamNiv | Comments Off on From the journal of Ram Niv, Planeswalker #4 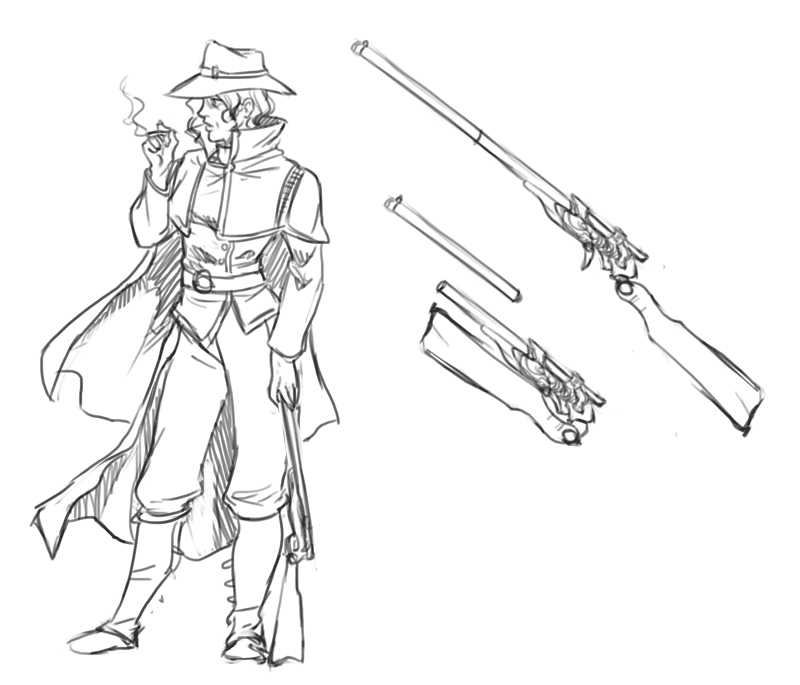 Here we have the final concept design for Theo- I mean, Amelia Durrington. Nothing much to say about Amelia’s look herself though, it’s identical to the original design, except female, heheh.

What has Humbug right chuffed is that Amelia’s weapon is an example of high-end arcanotechnology and no, I did not make that word up.

Most firearms in Pylea operate on a blackpowder basis, in the form of a pre-packed powder charge loaded into a metal jacket,leading to an almost conical metal tip. The trigger causes the hammer to spark, igniting the powder which propels the bullet tip.A breech-load mechanism allows the user to eject the spent casing.

Rune firearms on the other hand, have an entirely different system. A solid metal projectile is loaded into the chamber via a breech-load. Along the inner length of the barrel are runes of kinetic force that form an incomplete circuit.

Touching the trigger rune, which occupies the space of a normal firearm trigger, completes the circuit and causes the weapon to launch its little friend at a velocity superior to a standard blackpowder arm.

Despite the lack of any combustive reaction, the weapon channels a considerable amount of kinetic force along the chamber and barrel, resulting in a recoil similar to that of an actual rifle. In relation to that, please note the lack of a hammer that is typically found in most flintlock weapons.

To keep the firearm from going off by accident (the trigger is pretty much a hair trigger after all) a trigger guard can be flipped out when assembled.

It is also due to the lack of moving parts that the runic firearm can be collapsed to fit into its handy-dandy little briefcase, with the barrel being unscrewable as well as a collapsible hinge at the stock.

Aaand I can feel my eyes glazing over proofreading this, so that’s it for today’s Pylean ballistic pseudo-science lesson! Have a nice day!