From the journal of Ram Niv, Planeswalker #3

My new-found traveling companions and I have found a place to stay in this interesting city. The architecture here for one defies conventional civil engineering standards, and I find the buildings leaning precariously in defiance of the laws of nature quite fascinating.

Gruber tells us he had located a suitable tavern and inn that will serve our needs as a temporary base of operations while I explore the city. And so it is that I now am firmly lodged in a modest room on the 3rd floor of the Smoking Slug with a commanding view of what passes for the city square along with a rather grotesque statue of a naked someone in the loving embrace of a many-tentacled monster.

Posted in Six Packs and Seafood | Tagged RamNiv | Comments Off on From the journal of Ram Niv, Planeswalker #3

From the journal of Ram Niv, Planeswalker #2

Arteria has many similarities to a vast majority of cities I’ve visited across many worlds. For one, they have distinct social classes with the nobility and well to do at the top of a pyramid with the commons and lower class citizens below.

What is the most common dish served in Arteria? A chicken may be spit and quartered to feed four aristocrats in one sitting. Or it may be cut into 16 equal quarter quartered portions and stewed with potatoes (a staple vegetable), carrots and onions (all ground root vegetables you’ll note) for a healthy stew. The carcass of the chicken may then be made into a broth with some grain for the lower classes and the poor. In all cases, this simple meal is accompanied with bread and simple potables like small beer or watered ale.

I have yet to sample the efforts of the local vintners.

Posted in Six Packs and Seafood | Tagged RamNiv | Comments Off on From the journal of Ram Niv, Planeswalker #2

From the journal of Ram Niv, Planeswalker

Some 36 thousand souls inhabit this foggy city of Arteria. I wonder if the locals here realise that their city was named after an artery?

After spending two weeks observing the locals and the lifestyle here I have observed that if only half the population of Arteria consumes two eggs each a day, then an average of 125,000 eggs are imported and consumed weekly, which in turn is brought in with meat by poultry farmers daily. If each farmer can harvest 100 eggs, some 1,250 poultry farmers visit Arteria weekly.

That’s a lot of eggs…

Posted in Six Packs and Seafood | Tagged RamNiv | Comments Off on From the journal of Ram Niv, Planeswalker

A note from the Naga’s Desk

Well, hello everyone. Sorry I’ve been, well… completely and totally absent these past few months. Or is it even a year or more now? I don’t honestly know. Time has honestly really just gotten the best of me as of late, but that’s just an excuse, I know.

Anyway! I thought I’d take a moment and introduce myself. I’m Matt Summers, writer of ‘Let The Hunt Begin!’, the fan fiction based on the facebook-based game Mousehunt by HitGrab Entertainment. I’m also the writer for Tales of Pylea – Crux, as well as a supporting writer for the main Tales of Pylea story as Humbug whips Chris into submission … I mean, gets him used to the inner workings of the webcomic world. *cough*

I’ve personally been writing for a very, very, very, very, very, very… *gasps for breath* very long time. For the world of webcomics, I’ve been involved with them since 2004, starting way back with a fantasy anthro webcomic called “Patchwork” that’s long dead, but I still keep the original cast image around for memory’s sake. 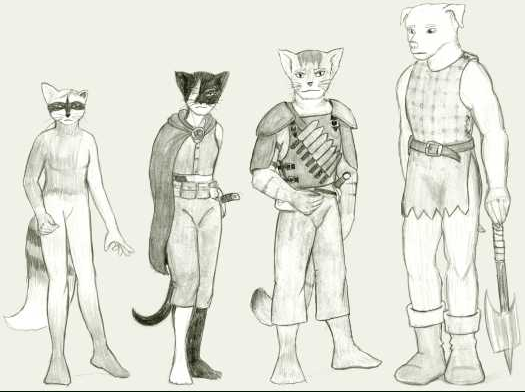 Then I started a webcomic with a VERY good friend of mine, an EXTREMELY talented lady by the name of Michelle Zastrow. 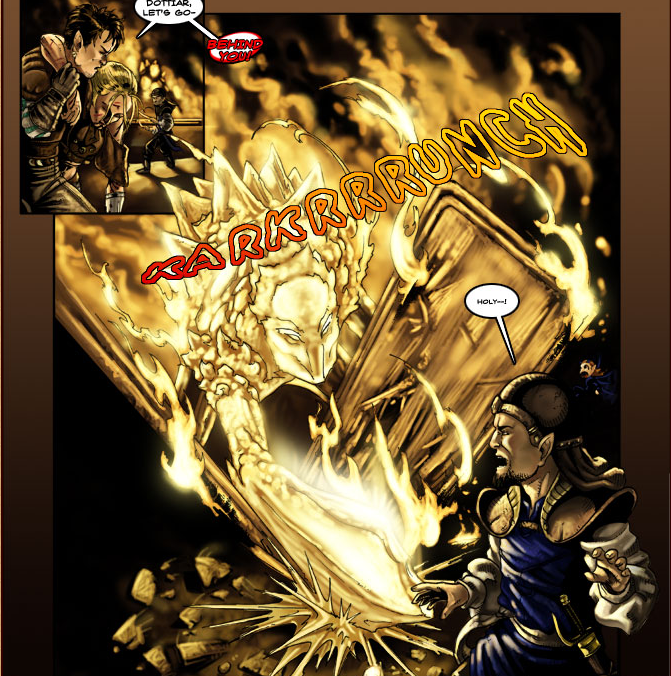 This comic would run for a good decade, entitled Tales of the Traveling Gnome. This was a fantastic, fun, and amazing journey, but all good things must come to an end, and after ten years, we decided to end the comic.

Some other comics I’ve been blessed to work with over the years include The Evil Overlords United, SuperFreaks, and a few others I can’t honestly remember the names of at this current time.

But it was during this time that I made the acquaintance of a certain artist you all know. She was drawing and writing her own story, and having some difficulty making the storyline work out, and asked me if I could give her some pointers on how to make things mesh.

The next thing I knew, Humbug had roped me into a complete and total rewrite of all of Tales of Pylea’s entire history (first rewrite), and that, as they say, is that.

You wouldn’t know it, but ToP is almost 8 years old, 4 of which was spent updating consistently, and almost 2 on hiatus. I started doodling the pages near the end of college in 2004, faffed about during my 6-month internship and only really dived into it after my contract ended. It was pretty smooth sailing for the rest of the year. And when I went to Australia to study in Uni, I suddenly had all the free time in the world, having only 3 days of classes go to, (and two of those days classes was only 3 hours long) that left me with 4 days of nothing to do. Being a poor student and not really used to the Australian lifestyle; I don’t drink and hanging out in clubs was not my idea of a fun time, I spent most of it in front of the computer, so what else was I to do other than draw? It was then when I was able to churn out two pages a week, and I was having a grand time doing it.

So what happened? Well, I graduated and stepped into the working world. Working 45 hours a week can take a lot out of you and having to commute up to 2 hours a day didn’t help matters much. It was a good job, but so much of my energy was spent on it that I was losing the enthusiasm to do my own things. Every night when I got home all I wanted to do was just vegetate on my couch. Because I didn’t have the energy I ended up just half-assing the comic. My lovingly rendered pages turned into lazy chicken scrawls and it pained me to see my pet project deteriorate like that. Updates plodded into a halt when Matt, my writer started having writer’s block. By then I was glad to take a break from forcing out a page every week and was more focused on my day job.

Most people would have just let their domain expire and move on, but I never did. I diligently renewed mine every year, thinking on some level that I will get back to ToP even though I hated the way it turned out.

And then I received my first ever negative review. It felt like a punch in the gut, but it confirmed the doubts I was having about ToP. I’m a terrible writer, and bringing in a more competent one didn’t help to fix the train wreck I started. I figured it was probably a good time to start over and Matt agreed with the reboot. We have both grown while working on the comic and we could finally use what we learned and take ToP in the right direction. Unfortunately that reboot didn’t go very far as once again Matt got struck with a block and I was too busy focusing on my job.

A year later after getting a new job, it was much closer to home and there was less stress from commuting that I finally regained the enthusiasm needed to work on my personal projects. (It also helped that I was growing out of my gaming habits and didn’t play as much as I used to) I was desperate to return to ToP but unfortunately Matt, albeit a wonderful friend and person, was still unable to write. But I was able to get someone else to take over. His name is Chris, and you have seen his presense dotted about in this website. I’m very happy to include him in my team.

Since we didn’t go to far with the first reboot and I didn’t want to repeat the mistake of picking up where the old writer left off, I figure it was easier to just start over again, and reimagine the whole setting in the process. My friends went “WHAAT? You’re rebooting AGAIN?” Looking back, I have matured in those 8 years and I realized the original ToP was very derivative of D&D. I still enjoy the game, but using it as a basis for your setting is lazy and unimaginative, so I wanted to move away from it as much as possible. It will still be fantasy, but It’ll be our take on the genre, and I hope you’ll find it’s a much more interesting take when we get to it. Even if you think it’s unspiring or not I will say we are actually working it out properly now. Regardless of what some might say, if you’re doing an epic story with a proper setting you NEED to plan it, and unlike writing a novel we don’t have the luxury of going through multiple drafts.

So yea, this is where ToP has come up to. Do I regret spending years on a comic that amounted to nothing? Hell no! It started out as a hobby and remained that way, so it was easier to put aside for a while. I hung on to it for so long because it was not something I just started on a whim. It’s actually very personal to me so I won’t be going into that. It helped me improve as an artist and although I can’t write my way out of a paper bag, I think I’m a decent enough editor to catch what is important (and what is not) in a script to put it to comic form. (Or to tell my writers what works and what doesn’t)

I do think that the new ToP will be much better than it’s original run. 🙂