I’m going to be posting some gag strips. (Because I need an excuse to pad out my blog) And since I don’t come up with real jokes too often I won’t be doing them regularly; just when inspiration hits me. One possible problem that comes with my jokes is that they are often inspired from happenings in my life. This means it can be considered an inside joke and I’ll have to do some explainin’ and that will kill the joke as some people might say.

Still for the most part I won’t just be explaining the joke, I’ll also be going into the process that led up to it. So if my gags don’t get a giggle out of you, at the very least you’ll get some insight from the going behinds of ToPComics.

Anyways, I drew this piece after Chris and I had a little disagreement with Arianhod’s muscular build. But as you can see, I obviously don’t care. 😛

Just kidding, it’s actually Lair, thug extraordinaire and Arianhod’s partner in crime. As you can see, elves have rather big ears…

And you know what they say about elves with big ears. *nudge* *nudge* *wink* *wink* Joking aside, the uncanny resemblance to Marsters was unintentional, the original sketch actually looked nothing him. Coincidences, eh? 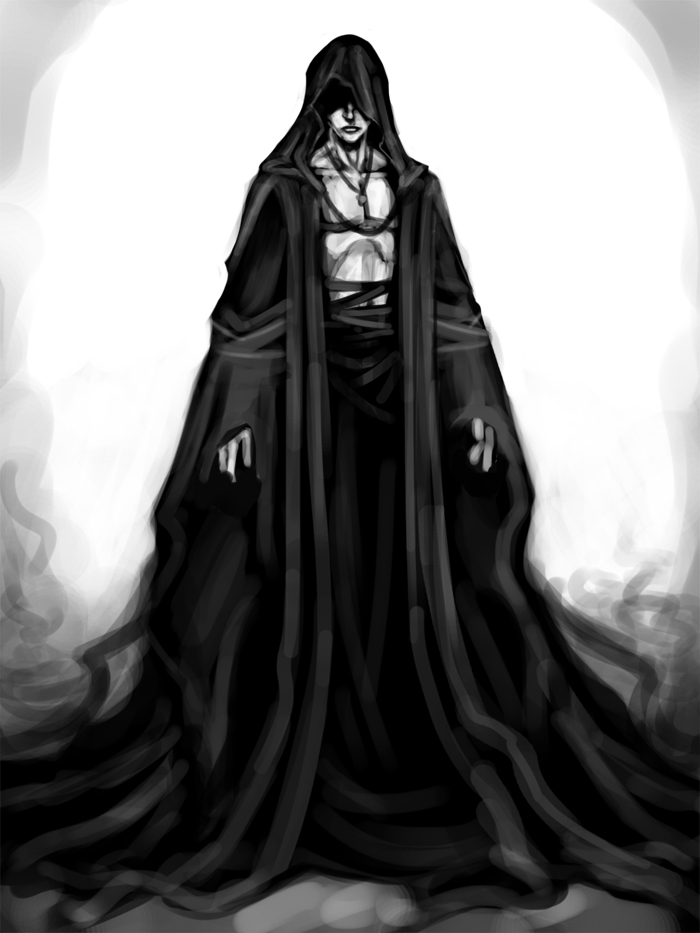 Brainstorming stage for ToP is trucking along nicely. We’ve already got the outline for the first arc which I shall call Book 1, it just needs a couple more minor tweaks and then it’ll be time to start scripting. Since we’ve figured out who the characters are I can start to draw out their concepts. So I’m starting off with the main antagonist of the story, currently referred to as the Devourer. We are still thinking of changing his title to something better if we can figure out what it is. And…. that’s pretty much all I can say about him actually. I won’t elaborate on his background because they are major spoilers. It’ll be much for fun to find out through the course of the story. So all you have of him right now is his title, which obviously means he likes to eat, hah. 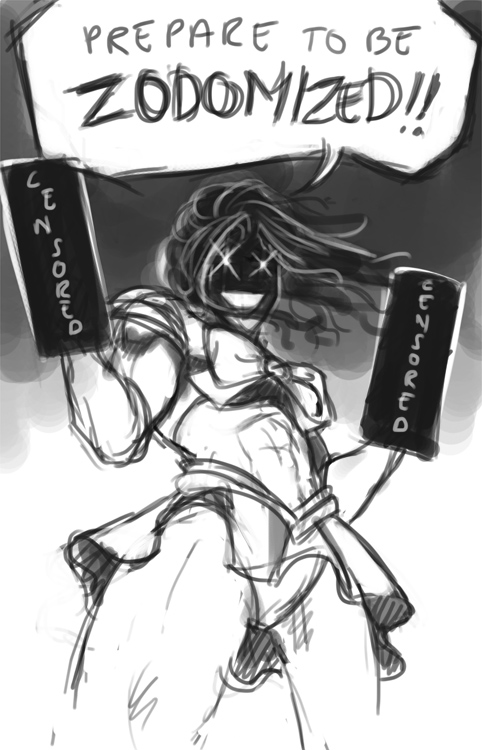 I’m not really good at jokes, which is probably why I’ll never do well with a gag webcomic. My ability to come up with a decent joke happens as often as a rafflesia in full bloom, (that analogy could also describe how much my jokes stink but I digress) although I will say that is still more than my ability to craft a decent narrative, which is absolutely none from a past webcomic attempt.

That said, I didn’t even come up with this joke, it was actually Chris, all I did was draw it. Well, the censor bars were from me, so there’s that. I think this piece looks pretty ridiculous in its own right, but some context might need to be in order.

While ToP was being reworked, I asked Chris what he thinks Arianhod’s background should be. He said she should be a princess from the planet Zod, she transforms into the mighty Sailor ‘Hod and her special ability is called Zodomy. He wasn’t expecting me to draw it, but I thought it was too hilarious not to. So there you have it, Princess Arianhod everyone.

PS: Princess Arianhod is a trained professional, so please don’t imitate her, kids. 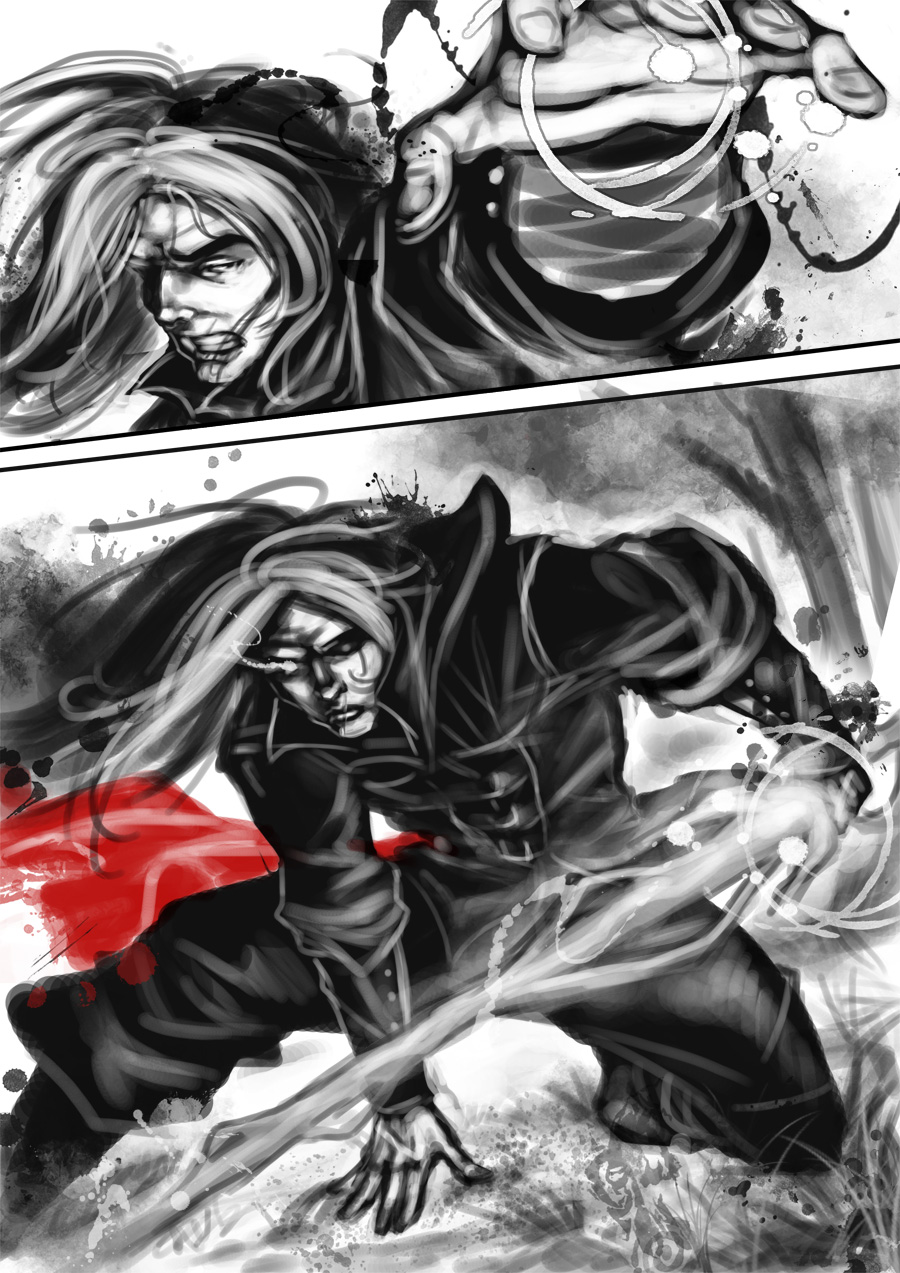 In preparation for the (eventual) relaunch of ToP, I decided to practice the new style by redrawing one of its original pages. I’m somewhat pleased with it, and I think it’ll work pretty well for regular updates. How long did it take to finish this page? A little over two hours, not too bad, but there’s lots of other factors that will add to the drawing time; no. of panels per page, no. of characters in each panel, amount of background in each panel, the list goes on. I still have a habit of getting hung up on detail as I did spend a tad more time than I should have on F’nor’s face. >_> I intend to spend no more than four hours a page, altho overtime might be unavoidable if I decided to squeeze in 9 panels or something.

I played around with adding blue to the spell effects, but it didn’t sit right with me. I’m not sure how to explain it, maybe it might be the hue of blue or something. But I think I’ll stick with red being the only visible colour.

Here’s the original page for comparison if you’d like to see it.

The style was actually inspired by a panel from Sandman’s Preludes and Nocturnes. I believe the artist is Mike Dringenberg? I liked that the toothbrush splatter technique was used to ink Morpheous’ hair and wanted to incorporate something similar. I realized however that this style is a much closer derivative of Street Fighter 4’s beautiful artwork. It only occured to me after I finished the page. My work is but a pale imitation/shitty rip-off of Daigo Ikeno. >_>